Process for Watercolor Paintings of Saint Joseph, Guardian and Protector and Saint Joseph the Worker

Even though Saint Joseph, as the husband of Mary and adoptive father of Jesus, is a central figure in the story of salvation, I personally haven’t spent much time reflecting on him. Thus, I found Pope Francis letter, Patris Corde (With a Father’s Heart), to be very enlightening.

It’s a beautifully written letter with everything I would expect when examining the life of a saint and biblical figure.

I love how Pope Francis opens the letter with numerous references to the Bible. This gives us an understanding of where Pope Francis’ reflection begins and that it is biblically referenced.

Another aspect of the letter that stood out to me was how God communicated to Joseph through dreams. I, myself, have had prophetic or psychic dreams. Sometimes I pay attention, sometimes I don’t. Overall though, it can be hard to know when a dream is just nonsense and when it is meaningful. But I appreciated the reminder that God does communicate through dreams sometimes.

Who is Saint Joseph?

In his letter, Pope Francis reflected on these 7 characteristics of Saint Joseph’s role, personality, and life:

My favorite were a creatively courageous father and a father in the shadows.

As a creatively courageous father, Saint Joseph doesn’t simply surrender to God’s will, but he creatively finds ways to align himself to His will. The example I liked best was how Saint Joseph found a safe place for Mary to give birth to Jesus when all the inn’s in Bethlehem were full.

We often overlook people who are not constantly in the spotlight, but Pope Francis reminds us how important these people are. In terms of my faith, I have spent a lot of time praying to Mary and other saints, but I often forget about Saint Joseph. Thus, he is still very much “in the shadows” doing the necessary work in the background but not getting attention for it.

For these watercolor paintings, I wanted to paint a pictures of Saint Joseph, both as a father and as worker.

First, I wanted to paint a picture of Saint Joseph that would serve as a pair to the previous painting I made of Mary, Mother of God.

I imagined Saint Joseph as the silent guardian and protector of Mary and Jesus. He is happy to be in the background, doing the work needed to keep his family safe and provided for. While Mary and Jesus are constantly put into the spotlight for us all to see and reflect on.

These are the pictures of statues that I used as reference.

I used the first picture as the main reference in which I transferred the image by tracing with pencil onto the watercolor paper. However, because the statue was gray and not in full color, I used the second picture to determine which colors to use.

Here is the final painting:

Instead of the hatchet, I wanted to paint Saint Joseph holding his signature symbol of lilies, so I drew lilies in the place of the tool.

Initially, I was hoping to do a monochromatic watercolor study and I researched which color represented Saint Joseph. Two colors came up: gold and red. I found that these colors complemented each other well. Thus, I decided to use both colors instead of just one.

Since I’ve been exploring David Mack’s painting style, I found a painting of his that was red and gold and used this as another reference.

The colors I used in this painting were crimson and yellow ochre. To deepen the reds, I added some burnt sienna.

This is the finished painting:

At the start of every Mass, our parish has been reciting Pope Francis’ prayer to Saint Joseph. I read this prayer for inspiration for these paintings:

Hail, Guardian of the Redeemer,
Spouse of the Blessed Virgin Mary.
To you God entrusted his only Son;
in you Mary placed her trust;
with you Christ became man.

Blessed Joseph, to us too,
show yourself a father
and guide us in the path of life.
Obtain for us grace, mercy and courage,
and defend us from every evil. Amen.

Thank you for reading this post and I hope you enjoy these two new paintings. 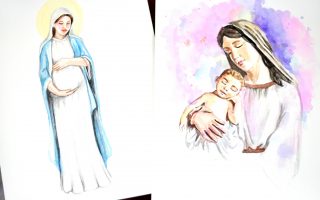 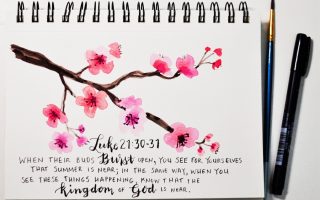 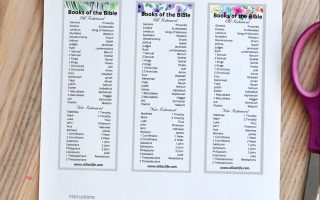